Week 5 of iPads in the Classroom: Video Editing

This week has gone quite smooth overall. The students are adapting well to using the iPads daily in our classroom and I find that I have to spend less and less time on the basics. They are becoming more proficient in moving from app to app and website to website. I think we are learning together to be more efficient.

This week I decided to try out some video authoring on the iPad. So I had some assignment for two of my classes one using the Animoto app, and the second using iMovie.

Prior to having iPads in my classroom I was enjoying using Animoto.com in our computer lab with students to put together some small presentations and for them to showcase their learning. Now with iPads, we decided to try the Animoto App. I should have known not to try it because it is written for an iPhone and projects small on the iPad screen. I had students follow these steps for their short animoto presentations

All of these steps went well except for #5. The Animoto app seems to be really prone to crash and did so numerous times, it really impeded the flow of the project for some. Those who finished and then hit publish found themselves waiting forever (it appeared to be frozen) for the video to upload and render. I think this may be that our WiFi system hit its limit. However, I really don't think it should be so easy for it to freeze up. I managed to create a quick video myself on my iPhone and it uploaded quite fast on 3G. So I am not sure why we couldn't get this working so well. Another WiFi infrastructure issue maybe?
I ended up having many students switch over to iMovie where we had no problems...I just had to give them a quick tutorial on how to insert images and sound.

My recommendation is to NOT use the Animoto app any longer until they release an iPad only app.

Another group of my students did some great work in iMovie this week. They easily figured out how to add photos, video, text and music to create some very nice group videos. The only issues that surfaced was that there seems to be no way to divide video clips into shorter segments so they can insert pictures. This is easy to work around by not filming longer segments. Again, I had some difficulties when students went to upload to our class Youtube account. It was slow and I basically tried to only have one student at a time upload. This ended up stalling many groups from uploading their finished video, which is why I am still waiting for some. These technology issues are not the best use of my time, but I had no choice.
I will definitely have students use iMovie again and I think their proficiency with it will make it go faster.

This week I also did some experimenting with a backchannel conversion using SoapBox. I heard about this from someone on my PLN: twitter. Anyway all I did was create a free account with Soapbox, then create a new Box for my class. Then soapbox displays an event code that students enter to join the Soapbox. Now I had students logged on to this on their iPad while we watched a video. I posted questions here as the video went along and encouraged students to chat, ask questions, and answer other students questions. 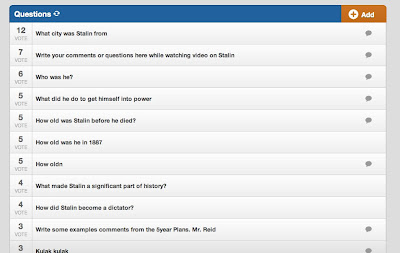 Beside a few off topic posts by students (which I could delete while the event was open) it went really well. I am going to experiment with this some more in the future and encourage more participation. One thing I liked about Soapbox was the fact that the chat was not public like twitter and is really easy to use for participants.

Well it had been a good week and as alway, I expect I will learn lots more next week.
Posted by KamloopsEdTech at 14:40